Beautiful In Its Place
The Story of the Lionfish

Nature offers a limitless variety of beauty. But what is beautiful in one region can be the last thing you want to see somewhere else. That is often the story of the Lionfish This beautiful and dramatic animal is native to the waters of Indonesia. It has striking colors of red, maroon, brown and white and several elaborate fins, some of which are venomous

How an invasive species works
In recent years, the lionfish has found its way to the Caribbean, where it has no natural predators.  It is believed to have been introduced to the Southern Atlantic by humans releasing aquarium fish into the wild. Unfortunately, these lionfish kill off helpful species such as algae-eating parrotfish, potentially allowing seaweed to overtake the reefs creating an imbalance in reef ecosystems. The lionfish population is continuing to grow and increase its range into the Gulf of Mexico, and in waters north of South America. Governments are trying to stop the growth of lionfish and other invasive species by making laws that make it illegal to release fish, snails, turtles, frogs, or other animals into the wild. 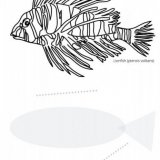