Orcas are found in every ocean in the world with territories including open seas and coastal waters. Artists like Wyland are inspired by widely recognizable features such as their distinctive black and white bodies and huge dorsal fin. Orcas use a coordinated hunting strategy, working as a team to capture prey, with some orca groups feeding almost exclusively on sea lions while other groups rely on salmon for food. And, it is common for Resident Killer Whales to share food, even a single salmon, among members of their group. That’s a close family!

Killer Whales are protected under the Marine Mammal Protection Act, yet the Orca populations in the Northern Pacific Ocean have severely declined due to human impact. Their populations face many threats, including food scarcity when competing with humans for fish, chemical contaminants from urban runoff, and disturbances from vessel traffic and the inescapable sounds from ships’ motors and sonar maneuvers. Before working on these orca activities, take some time and learn more about how to protect killer whales and their food sources. 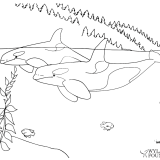